Victoria's largest regional city is in transformation. In Geelong's vibrant commercial heart and along it's seaside promenades a bold civic vision is steadily unfolding.

At least a decade ago a broad collective of insightful leaders from Geelong's education, business and local government sectors recognised that instantaneous access to community information is both a valuable practical resource and an important example of local ingenuity successfully delivering globally competitive smart-community infrastructure.

In 2010 the bold vision of the Geelong Info Net, a free public WiFi information network, became a reality and the cycling enthusiasts who assembled en masse for the UCI Road World Championship held that year were the first to benefit. A mere 3 years later 36 access points create a footprint covering the Geelong CBD, waterfront and an increasing number of suburbs.

The founding Info Net stakeholder group who signed the original Memorandum of Understanding has grown over time and now embraces Deakin University, The Gordon Institute, Geelong Otway Tourism and local Internet services and solutions provider Duxtel, whose DuxTel Commander network management solution is at the heart of the network.

“It would not have happened anywhere else”, says Simon Jackson, Enterprise Geelong's Economic Development Officer. Simon's approach to regional development and revitalisation is informed by two and a half decades of international experience and he sees the Geelong Info Net as the cornerstone of the City's digital strategy - a strategy that he urges all regional cities to develop rather than taking a piecemeal approach to the provision of smart-community services.

“Geelong - in it's modest way - was first. Our initiative, with its formal beginning over 10 years ago, is recognised as valuable by Councillors as they know visitors have a voracious appetite for information about local events, attractions and services”.

The Geelong region attracts six million tourists every year and Simon knows that “when tourists disembark at a destination they have an expectation of public wireless Internet access and the provision of timely and relevant tourism, retail and entertainment information. If Geelong is to compete in this world market it needs to offer the same digital services to visitors as other world-leading regional centres”.

A two year pilot project also demonstrated the potential to support city retail, improve delivery of Council services, infuse the CBD with business and professional services firms and encourage a cluster of community and health services such as medical suites.

Simon further anticipates that the network will yield valuable market research data that will lead to a better understanding of the human geography of the town centre and inform improvements in town planning decisions and the management of large public events.

For more than 100 years Geelong has been a leading provider of post-secondary education and its knowledge, research and innovation capability is vital to its economic future. The Info Net supports internationally-focused Deakin University and Victoria's largest regional health care organisation - Barwon Health - by providing VLAN gateways into the Info Net. Students and researchers enjoy the same secure high-speed access to network resources from the grassy slopes overlooking Geelong's famous Victorian era bathing circle as they would if sitting in the main library.

Andrew Van Slageren, a system administrator in Deakin University's e-solutions group, is an enthusiastic advocate of the integration between the network and Deakin's intranet. “It's great that any Deakin student or staff member, or in fact anyone from another eduroam institution can take a wireless device like a phone or laptop, walk into the centre of Geelong or along the waterfront, and connect seamlessly to the COGG network with no configuration required”. On average around 350 unique users per day connect to eduroam from the network.

This investment in infrastructure makes Geelong more attractive to creative and talented people and is a prime example of what Simon Jackson sees as the role of the network in prototyping “new collaborative ways of thinking and working” that will create a more diverse and resilient city. “This wouldn't happen everywhere” he says, “there was a sense of community spirit and a drive amongst the project stakeholders to achieve a successful outcome”. 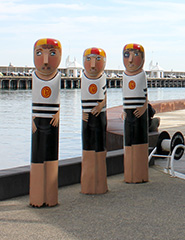 This wouldn't happen everywhere. There was a sense of community spirit and a drive amongst the project stakeholders to achieve a successful outcome.