Created almost a decade ago to explore the long range networking capabilities of the then new 802.11b Wifi standard – Melbourne Wireless is one of the oldest community wireless network groups in the world. Of late its members have become enthusiastic adopters of Mikrotik systems supplied by Duxtel.

With 3 different MikroTik RouterBOARD models in use across 6 network nodes, telecommunications technician Dave has practical experience of their advantages.

"In the early days of Melbourne Wireless we were held back by the speed of the wireless links, however as we learned to build higher capacity links the speed of the routers themselves became the bottleneck. The RouterBOARDs have much higher throughput and their sensational GUI makes setting up routing an easy point-and-click operation. It's awesome to be able look at traffic statistics in real-time and on a per-interface basis".

Dave uses the Melbourne Wireless network to experiment with VoIP telephony, make Skype calls with friends and run webcams that provide panoramic views of the city. He values a number of the more subtle features of his RouterBOARDs:

"They have very low power consumption. We have a site in the Yarra Valley that runs almost entirely off 3 80Watt solar panels and includes 7 radios. They're also very compact and their wide DC input voltage range makes them very flexible in this type of battery-powered application."

In addition to routing point-to-point links the ability of MikroTik RouterOS to run multiple wireless networks over a single radio also makes them ideal for Access Point nodes.

"The Virtual AP capability of the DuxTel products means that I can implement a standard Melbourne Wireless node at the same time as a public captive portal offering information about the local area", says Melbourne Wireless member Bob who operates a node in Geelong.

For Melbourne Wireless President Peter, a network engineer by day, the advantage of the MikroTik routers is their flexibility. "With 3 mouse clicks you can bridge ports together and keep adding things like secondary IP addresses, VLANs, tunnels, bridges and selective NATing of interfaces".

He also appreciates the ease of access to the serial console, demonstrating to fellow members at a recent meeting the ability to remotely administer an uninterruptible power supply protecting a key node in Melbourne's leafy Dandenong ranges from power interruptions caused by fallen branches.

Peter feels that the MikroTik routers compare favourably with industry leaders such as Cisco in their feature set, flexibility and ease of configuration.

A unique feature of RouterOS is 'Torch' - a real-time traffic monitoring tool that displays network activity in a simple format based on criteria such as source and destination addresses and packet rates. Peter comments that he loves these "easy-to-use tools that instantly give you a view on what traffic is passing on an interface. The torch and firewall view functions are great!" 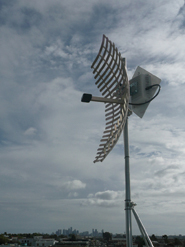 Founded in 2001, Melbourne Wireless Inc is a community wireless network owned and operated by individual members as a platform for experimenting with long-distance wireless links, antennas and network routing protocols. It includes over 100 "nodes" on the roofs of members' homes or strategic locations around Melbourne and Geelong. With many links in excess of 20Km and some stretching over 100Km the members of Melbourne Wireless members have almost a decade of practical experience in pushing wireless networking hardware to the limit.